The Cameo 3 is the most recent update of Silhouette’s flagship crafting machine, and one of the most popular cutting machines on the market. If you’re a crafter or maker, this machine is likely on the list of tools you’re considering for personal or business use — or you may be deciding whether it would be worth the investment to upgrade from an older Cameo version or other cutting machine. This Silhouette Cameo 3 review will highlight what to expect with this versatile tool, as well as identify its advantages and disadvantages as a tool for creation. 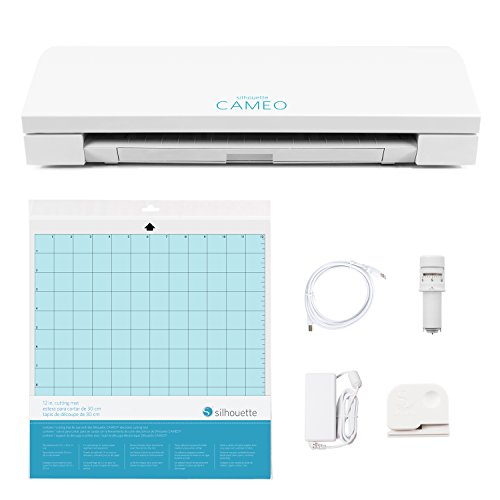 Mainly functioning as a tool for programmed cutting, the Cameo 3 boasts the ability to cut through a wide range of materials, including cardstock, vinyl, and fabric, with a maximum cutting width of up to 12 inches. Print and Cut functionality allows you to cut out printed designs created in the Silhouette Studio software using registration marks, and the machine is also PixScan compatible. The Cameo 3’s dual carriage helps save time by letting you send information for two different tools, such as the Autoblade and the sketch pen), to the machine at the same time.

One of the main advantages that the Silhouette Cameo 3 has over comparable machines is its flexibility and versatility. Where similar cutting tools rely mainly on provided templates and purchasable designs, the Cameo provides these type of designs as well as the ability to create your own custom designs with either the Silhouette software or another design program.

Along with the wider range of project possibilities, the Cameo 3 has double the cutting depth of the Cameo 2 and an AutoBlade that makes it much faster to identify and set the correct cut settings based on the material. It can also cut rolls of of material for designs up to 10 feet long – perfect for banners and larger vinyl projects. Lastly, the sleek design of the Cameo 3 features a touch screen that is easy to read and use, as well as plenty of extra storage space to keep your favorite cutting tools and accessories close at hand.

While Silhouette’s Cameo 3 is certainly a versatile tool for your design and crafting ambitions, it does have several downsides that should be noted. Most obviously, the Cameo’s third iteration is both larger and heavier than its predecessor, limiting its portability. A slightly weaker and slower cutting machine compared to competitive models, it is also quite noisy while at work, especially considering how other devices like printers have been redesigned to work more quietly.

Compared to more industrial cutting machines, the Silhouette Cameo 3’s functionality is also limited, as it cannot cut anything wider than 12” and won’t be able to dependably cut through anything much thicker than cardstock. The Bluetooth functionality of the machine promises a cord-free connection to your computer, but in reality that connection is unreliable enough to warrant using the USB option instead. Finally, while the Cameo 3 offers more project flexibility, the powerful software brings with it a steeper learning curve than systems that rely on pre-formatted designs.

Overall, the Silhouette Cameo 3 is a versatile machine for projects that require cutting and scoring a wide range of materials for both creative projects and business endeavors. It does have some limitations in functionality, but the Cameo 3 is a significant upgrade from previous Silhouette versions in terms of scope and convenience. From paper-crafting and kiss-cut stickers to fabric designs, this machine is a great companion for makers and creators at all levels.

Jane is a stay-at-home small business mom. She makes more than her husband selling her creations on Etsy.